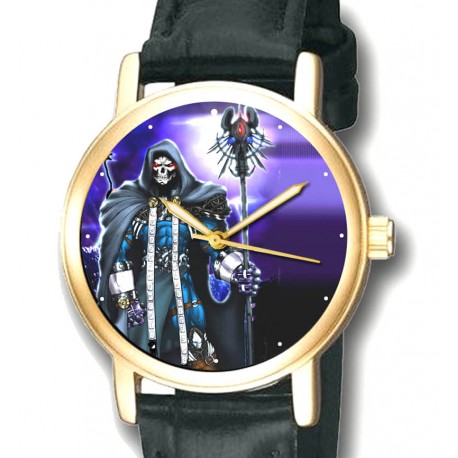 He Man & the Masters of the Universe - SKELETOR Collectible Wrist Watch

Skeletor is a fictional character and the main antagonist of the Masters of the Universe franchise created by Mattel. He is the archenemy of He-Man. Depicted as a muscular blue humanoid with a purple hood over his yellowing bare-bone skull, Skeletor seeks to conquer Castle Grayskull so he can learn its ancient secrets, which would make him unstoppable and enable him to conquer and rule all of Eternia. In the 2002 series, Skeletor was once a man namedKeldor whose face accidentally got splashed with acid. He sacrificed his face to survive.

The first minicomics that accompanied the 1981–1983 line of Masters of the Universe toys presented the earliest version of continuity, and showed many differences from the more widely known continuity of the later cartoon made byFilmation, and the later minicomics which complemented it. He-Man was depicted as the scarcely superhuman champion of a tribe of stone-age jungle-dwellers. There was no royal court of Eternia, King Randor, Queen Marlena, or Prince Adamyet.

These very first minicomics, which were actually more like storybooks, with a single image per page footed by prose, stated that Skeletor was originally an inhabitant of another dimension, populated with others of "his kind." During "The Great Wars," an ambiguous concept which is largely ignored in later continuities, a hole was opened in the dimensional wall and Skeletor was thrown from his world into Eternia. Significantly different from the lonelier and entirely self-serving Skeletor of later depictions, the villain's key motivation in this first story is to reopen the rift between his world and Eternia, thus allowing Skeletor's race to invade and conquer Eternia alongside him. This was the initially stated reason behind Skeletor's desire to obtain the powers of Castle Grayskull, not merely seeking power for its own sake as is generally the case in later depictions. However, as this first incarnation of the franchise's continuity was particularly short-lived, many questions about this version of Skeletor's origin are left unanswered.

In the 1980s cartoon series Skeletor is a former pupil of Hordak, leader of the Evil Horde. When Hordak and his Horde invaded Eternia and stormed the palace, Hordak broke in and kidnapped one of the King and Queen's twin babies.[6] Man-At-Arms and the Royal Guard captured Hordak's apprentice, Skeletor, and forced him to divulge the whereabouts of his master, who had retreated to his base of operations, Snake Mountain. When cornered, Hordak opened up a random dimensional portal (later revealed to have led to Etheria) and leaped through with the baby Princess Adora in his possession. Skeletor remained on Eternia, raised an army of powerful minions of his own and took over as ruler of Snake Mountain. Skeletor's main goal is to conquer the mysterious fortress of Castle Grayskull, from which He-Man draws his powers. If he succeeds, Skeletor would be able to conquer not only Eternia, but the whole universe.

In the minicomics that followed the cancellation of the Filmation animated series, which can be seen as following on from the same continuity as the Filmation series, although there are still various contradictions, it is hinted that Skeletor is in fact Keldor, King Randor's long lost brother.

This implication occurs specifically in the 1986 minicomic entitled "The Search for Keldor", a story that involves Prince Adam and Randor searching for Randor's lost brother Keldor. When Skeletor learns of their quest, he muses that "they must never discover the secret of Keldor", as the truth will lead to his destruction.

In this story King Randor announces that Keldor disappeared years ago. "He thought to master magic; when his experiments went wrong and he was lost in a dimension beyond time!" One of the few elements of Skeletor's back story that remains consistent throughout the various continuities is that he had come to Eternia from another dimension.

It is likely that Randor's statement about Keldor disappearing to another dimension is an attempt to reconcile Skeletor being He-Man's uncle with his Extra-Eternian origins. To find out what happened to Keldor, Randor and the Sorceress attempt to peer through the dimensional veil.

Randor announces "I think I see Keldor... Or is it..." Before he can see anything else, Skeletor appears, determined to stop them from finding out any more. Although Skeletor is defeated, he is able to prevent Randor from discovering Keldor's fate.

Skeletor's frantic effort to cover up what happened to Keldor, combined with the fact that Keldor vanished to another dimension when attempting to become a master sorcerer, is taken as a heavy implication that the two characters are indeed one and the same. Unfortunately, because the original MOTU toyline came to an end before the story could be resolved, it was never fully disclosed if this was officially intended to be the case.

Steven Grant, the writer-for-hire of the minicomic in question, stated in a he-man.org interview that "As far as I remember, Keldor was Skeletor... But, I don't think that was ever going to be revealed... I seem to remember it as one of those things Mattel came up with out of the blue... Slur Keldor and you end up with Skeletor... His back-story wasn't really worked out. Some sort of evil cosmic energies altered him. I think they were going for a Darth Vader thing, but it was a tack-on... The main idea was that if they found out Skeletor was Keldor, they'd be able to find out what had changed him and might find some way to reverse it."

In the new continuity of the 2002 animated series, Skeletor's original name was definitely Keldor; his appearance as such is shown and his exploits partially depicted. However, it seems unlikely that he is related to Randor in this continuity, as he has Skeletor's blue skin and some other slightly nonhuman features while he was still Keldor. In a he-man.org interview with one of producers of the 2002 series, it is revealed that Keldor is the half-brother of Randor; they have different mothers.

In the Masters of the Universe Classics toy line, further character development was introduced. This line has offered more in depth origins to the Masters of the Universe characters and a collaboration of all origins in attempt to create a new coherent continuity. According to their revised back story, Keldor is Randor's half-brother. Keldor's mother was a member of the Gar race and he was ousted from the royal castle due to his Gar heritage. He roamed Eternia for knowledge, eventually learning the Dark Arts from Hordak. He then sought to unite Eternia by ruling it himself and battle his own half-brother with his army of fellow misfits. After losing the battle and desperate to survive, he turned to his mentor Hordak who merged Keldor with an entity known as the Demo-Man. Together they formed Skeletor