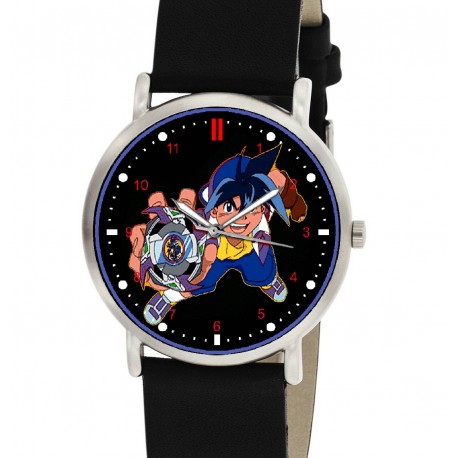 yson Granger (original version: Takao Kinomiya) is the main protagonist of the Original Series. He is the "#1 Beyblader in the World", having won three world championships in a row, and was a member of the Bladebreakers, a Beyblade Team that consisted of the leader, Kai Hiwatari, Max Tate, Ray Kon, Hilary Tachibana,Daichi Sumeragi, Kenny, his brother Hiro, and himself. He is also known as the one and only owner of the Bit-Beast, Dragoon.

Tyson was introduced in Season One, as a cocky, confident, and fearless Blader who strived to be "Number One", even when he failed. This is what may make him similar to Masamune Kadoya. Over the course of the series, Tyson matured and has taken his responsibility from being a young boy at the beginning of Beyblade, to grow into a young man playing Beyblade seriously. He is now the champion of the originals.

Tyson is also popular, for his relationship with his long-time rival and friend, Kai Hiwatari. From the beginning of the series, Tyson and Kai became arch-enemies, but as the series continued, they became close friends, and held a great bond very powerful, that made themselves, the Best Bladers.

Tyson can be comparable to the Metal Saga protagonist, Gingka Hagane, and even though Tyson was the Best Blader of the Original Series, he was not the leader of the Bladebreakers as his close friend, Kai, was. However, Tyson became the leader in G-Revolution, a later series!

Tyson is a strong-willed Blader who is not afraid to speak his mind and in doing so, he seems to get into more trouble than most kids his age but he handles those troubles very easily.

Tyson is famous for his sense of humor especially during Season One, where he is constantly making fun of 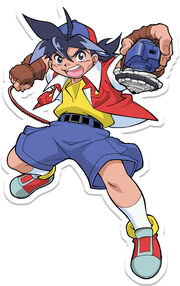 Tyson as he appears in Beyblade.everybody. His sense of humor constantly dwindles after each season and by the end of the series as he becomes more serious about his responsibility as the Number 1 Beyblader in the world.

Tyson is a really popular person inside the series. He had a lot of fans, even when he was an amateur. When he first won the regional tournament, many people picked up Beyblading just to be like him and defeat him. He has a lot of fans in his school as shown in Beyblade V-Force, much to Hilary 's dismay. Although he is popular, he doesn't seem to have many close friends outside of his beyblading ones. His closest friend throughout the series has been Kenny whom he goes to school with. But later, through the series he has developed very unique relationship with Kai, who became his closest friend. Outside of Beyblade, Tyson doesn't make friends easily because of his aggressive nature, but he usually leaves a profound effect on the ones he does, completely changing their attitudes and way of life. 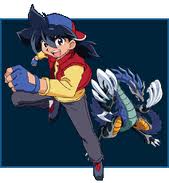 Tyson, as he appears in V-Force

In V-Force however, all the characters obtained a major redesign including, Tyson. Tyson's eyes turned to brown but kept the black hair, got lighter skin, but, still kept

the backwards hat, kept the open jacket, however the yellow buttons were removed but the collar was kept. He

kept the yellow shirt, the gloves turned into blue, his shorts were replaced with grey jeans and kept the shoes.

In G-Revolution, he received a minor redesign. His gloves turned a darker blue. His red jacket received short sleeves with a white highlights; covering his yellow tee-shirt long sleeves which were removed. He obtained a blue and yellow Beyblade container on his left arm and received new red and white shoes. He also replaced his grey jeans with dark blue ones.

While he is determined and strong of spirit in battle, Tyson can be rash and take too many risks. Tyson isn't very

Tyson as he appears in G-Revolution.

good at beyblade customization and sometimes lacks common sense. Tyson's Beyblades uses special attacks that take on the form of a Dragon, and they are generally one of the fiercest, more powerful beyblades around. They use the wind element. Dragoons are known to get better with each model possibly describing how Tyson develops as he grows up and learns from his mistakes. Tyson's bit-beast is Dragoon.

Tyson and his Bit-Beast Dragoon share a bond that is legendary throughout the series. His bit-beast often gains more power due to his vigor and endless supply of confidence, coupled with his ability to push himself to unimaginable levels. Every battle involving Tyson starts out in favor of Tyson with him taking his opponent off-guard with some impressive attacks, but just as he is about to win, his opponent pushes him down. In these situations, we see Tyson's never-say-die attitude, which ultimately gives him the power to execute his last attack, surprising his opponent, and winning.

Tyson seems to get his strange skills from his Dragoon Beyblade, such as being able to outrun dogs and cars. In the final episode of G-Revolution, the shared power between him and Dragoon gave him the ability to fly for the duration of his battle with Brooklyn (it is unknown if he retained this power afterwards). This could also have been an effect of Brooklyn's alternate dimension. It was the last battle tyson played with his dragoon.