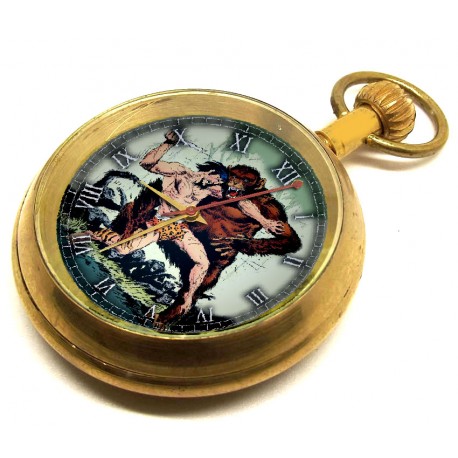 Tarzan is the son of a British lord and lady who were marooned on the Atlantic coast of Africa by mutineers. When Tarzan was only an infant, his mother died of natural causes and his father was killed by Kerchak, leader of the ape tribe by whom Tarzan was adopted. Tarzan's tribe of apes is known as the Mangani, Great Apes of a species unknown to science. Kala is his ape mother. Burroughs added stories occurring during Tarzan's adolescence in his sixth Tarzan book, Jungle Tales of Tarzan. Tarzan is his ape name; his real English name is John Clayton, Earl Greystoke (the formal title is Viscount Greystoke according to Burroughs in Tarzan, Lord of the Jungle; Earl of Greystoke in later, non-canonical sources, notably the 1984 movie Greystoke). In fact, Burroughs's narrator in Tarzan of the Apes describes both Clayton and Greystoke as fictitious names – implying that, within the fictional world that Tarzan inhabits, he may have a different real name.

As a young adult, Tarzan meets a young American woman, Jane Porter. She, her father, and others of their party are marooned at exactly the same spot where Tarzan's biological parents were twenty years earlier. When Jane returns to America, Tarzan leaves the jungle in search of her, his one true love. In The Return of Tarzan, Tarzan and Jane marry. In later books he lives with her for a time in England. They have one son, Jack, who takes the ape name Korak ("the Killer"). Tarzan is contemptuous of the hypocrisy of civilization, and he and Jane return to Africa, making their home on an extensive estate that becomes a base for Tarzan's later adventures.

Burroughs created an extreme example of a hero figure largely unalloyed with character flaws or faults. He is described as being Caucasian, extremely athletic, tall, handsome, and tanned, with grey eyes and long black hair. Emotionally, he is courageous, loyal and steadfast. He is intelligent and learns new languages easily. He is presented as behaving ethically in most situations, except when seeking vengeance under the motivation of grief, as when his ape mother Kala is killed inTarzan of the Apes, or when he believes Jane has been murdered in Tarzan the Untamed. He is deeply in love with his wife and totally devoted to her; in numerous situations where other women express their attraction to him, Tarzan politely but firmly declines their attentions. When presented with a situation where a weaker individual or party is being preyed upon by a stronger foe, Tarzan invariably takes the side of the weaker party. In dealing with other men Tarzan is firm and forceful. With male friends he is reserved but deeply loyal and generous. As a host, he is likewise generous and gracious. As a leader, he commands devoted loyalty.

In keeping with these noble characteristics, Tarzan's philosophy embraces an extreme form of "return to nature". Although he is able to pass within society as a civilized individual, he prefers to "strip off the thin veneer of civilization", as Burroughs often puts it.[6] His preferred dress is a knife and a loincloth of animal hide, his preferred abode is any convenient tree branch when he desires to sleep, and his favored food is raw meat, killed by himself; even better if he is able to bury it a week so that putrefaction has had a chance to tenderize it a bit.

Tarzan's primitivist philosophy was absorbed by countless fans, amongst whom was Jane Goodall, who describes the Tarzan series as having a major influence on her childhood. She states that she felt she would be a much better spouse for Tarzan than his fictional wife, Jane, and that when she first began to live among and study the chimpanzees she was fulfilling her childhood dream of living among the great apes just as Tarzan did.[7]

Rudyard Kipling's Mowgli has been cited as a major influence on Edgar Rice Burroughs' creation of Tarzan. Mowgli was also an influence for a number of other "wild boy" characters.

Tarzan's jungle upbringing gives him abilities far beyond those of ordinary humans. These include climbing, clinging, and leaping as well as any great ape, or better. He uses branches and hanging vines to swing at great speed, a skill acquired among the anthropoid apes.

He learns a new language in days, ultimately speaking many languages, including that of the great apes, French, English, Dutch, German, Swahili, many Bantu dialects, Arabic, ancient Greek, ancient Latin, Mayan, the languages of the Ant Men and of Pellucidar.

He also communicates with many species of jungle animals.

In "Tarzan's Quest" (1935) he was one of the recipients of an immortality drug at the end of the book that functionally made him immortal.

Tarzan has been called one of the best-known literary characters in the world.[8] In addition to more than two dozen books by Burroughs and a handful more by authors with the blessing of Burroughs' estate, the character has appeared in films, radio, television, comic strips, and comic books. Numerous parodies and pirated works have also appeared. Burroughs considered other names for the character, including "Zantar" and "Tublat Zan," before he settled on "Tarzan."