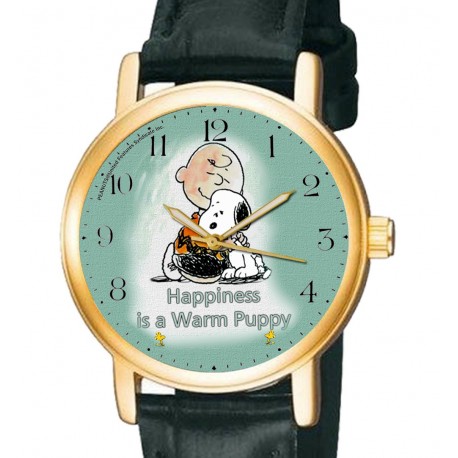 Charlie Brown is a lovable loser,[2] a child possessed of endless determination and hope, but who is ultimately dominated by his insecurities[3] and a "permanent case of bad luck," and is often taken advantage of by his peers. He and Lucy Van Pelt star in a running gag that recurs throughout the series: Lucy holds a football for Charlie Brown to kick, but pulls it away before he can kick it, causing Charlie Brown to fly into the air and fall on his back.

Schulz acknowledged that he created Charlie Brown as somewhat of a self-portrait, in that the character shares Schulz's self-doubt and insecurities.

Charlie Brown was one of the original cast members of Peanuts when it debuted in 1950, and the subject of the first joke in the strip. Aside from some stylistic differences in Schulz's art style at the time, Charlie Brown looked much the same. He did, however, wear an unadorned T-shirt; the stripe was added within the first year of publication (December 21, 1950), in order to add more color to the strip. Charlie Brown stated in an early strip (November 3, 1950) that he was "only four years old", but he aged over the next two decades, being six years old as of November 17, 1957 and "eight-and-a-half years old" by July 11, 1979. Later references continue to peg Charlie Brown as being approximately eight years old.[6] Another early strip, on October 30, 1950, has Patty and Shermy wishing Charlie Brown a happy birthday on that day, although they are not sure they have the date right.

His name has been stated by various sources to be for a childhood friend of Schulz, or for author Charles Brockden Brown, author of Edgar Huntly.

Although Brown is his last name, most other characters in the strip refer to him by his full name, as "Charlie Brown," rarely just "Charlie." Notable exceptions to the rule are Sally, who typically calls him "Big Brother;" Snoopy, who refers to him as "the round-headed kid;" and Peppermint Patty and Marcie, who often call him "Chuck" and "Charles," respectively. Although this use of his full name might be intended to distinguish him from some other Charlie, there's little evidence of this occurring. In the TV special "A Charlie Brown Thanksgiving," he identifies himself as "Charlie Brown" when calling his own grandmother on the phone.