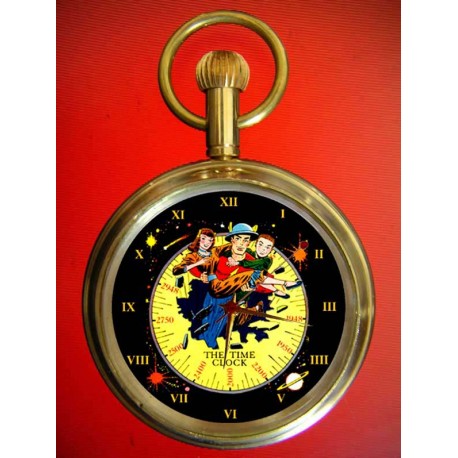 The Flash first appeared in the Golden Age Flash Comics #1 (Jan. 1940), from All-American Publications, one of three companies that would eventually merge to form DC Comics. Created by writer Gardner Fox and artist Harry Lampert, this Flash was Jay Garrick, a college student who gained his speed through the inhalation of hard water (later heavy water) vapors.

Jay Garrick was a popular character in the 1940s, supporting both Flash Comics and All-Flash Quarterly (later published bi-monthly as simply All-Flash); co-starring in Comic Cavalcade; and being a charter member of the Justice Society of America, the first superhero team, whose adventures ran in All Star Comics. With superheroes' post-war decline in popularity, Flash Comics was canceled with issue #104 (1949) which featured an Evil version of the Flash called the Rival. The Justice Society's final Golden Age story ran in All Star Comics #57 (1951; the title itself continued, as All Star Western).

In 1956, DC Comics successfully revived superheroes, ushering in what became known as the Silver Age of comic books. Rather than bringing back the same Golden Age heroes, DC reimagined them as new characters for the modern age. The Flash was the first revival, in the aptly named tryout comic book Showcase #4 (Oct. 1956).

This new Flash was Barry Allen, a police scientist who gained super-speed when bathed by chemicals after a shelf of them was struck by lightning. He adopted the name The Flash after reading a comic book featuring the Golden Age Flash.[1] After several more appearances inShowcase, Allen's character was given his own title, The Flash, the first issue of which was #105 (resuming where Flash Comics had left off).

The Silver Age Flash proved popular enough that several other Golden Age heroes were revived in new incarnations (see: Green Lantern). A new superhero team, the Justice League of America, was also created, with the Flash as a main, charter member.

Barry Allen's title also introduced a much-imitated plot device into superhero comics when it was revealed that Garrick and Allen existed on fictional parallel worlds. Their powers allowed them to cross the dimensional boundary between worlds, and the men became good friends. Flash of Two Worlds (The Flash (vol. 1) #123) was the first crossover in which a Golden Age character met a Silver Age character. Soon, there were crossovers between the entire Justice League and the Justice Society; their respective teams began an annual get-together which endured from the early 1960s until the mid-1980s.

Allen's adventures continued in his own title until the advent of Crisis on Infinite Earths. The Flash ended as a series with issue #350. Allen's life had become considerably confused in the early 1980s, and DC elected to end his adventures and pass the mantle on to another character. Allen died heroically in Crisis on Infinite Earths #8 (1985). Thanks to his ability to travel through time, he would continue to appear occasionally in the years to come.

The third Flash was Wally West, introduced in The Flash (vol. 1) #110 (Dec. 1959) as Kid Flash. West, Allen's nephew by marriage, gained the Flash's powers through an accident identical to Allen's. Adopting the identity of Kid Flash, he maintained membership in the Teen Titans for years. Following Allen's death, West adopted the Flash identity in Crisis on Infinite Earths #12 and was given his own series, beginning with The Flash (vol. 2) #1 in 1987.[1] Many issues began with the catchphrase: "My name is Wally West. I'm the fastest man alive."

Due to the Infinite Crisis miniseries and the "One Year Later" jump in time in the DC Universe, DC canceled The Flash (vol. 2) in January 2006 at #230. A new series, The Flash: The Fastest Man Alive, began on June 21, 2006. The initial story arc of this series, written by Danny Bilsonand Paul De Meo with art by Ken Lashley, focused on Bart Allen's acceptance of the role of the Flash.

Flash: Fastest Man Alive was canceled with issue #13. In its place The Flash (vol. 2) was revived with issue #231, with Mark Waid as the initial writer. Waid also wrote All-Flash #1, which acted as a bridge between the two series.[2] DC had solicited Flash: Fastest Man Alive through issue #15. All Flash #1 replaced issue #14 and The Flash (vol. 2) #231 replaced issue #15 in title and interior creative team only. The covers and cover artists were as solicited by DC, and the information text released was devoid of any plot information.

In 2009, Barry Allen made a full fledged return to the DCU-proper in The Flash: Rebirth, a six-issue miniseries by Geoff Johns and Ethan Van Sciver.