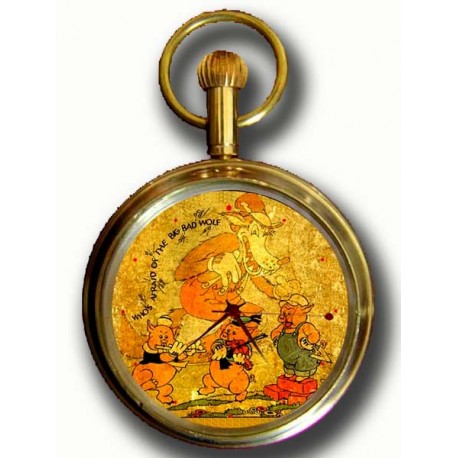 hree Little Pigs is a fairy tale featuring anthropomorphic pigs who build three houses of different materials. A big bad wolf is able to blow down the first two pigs' houses, made of straw and wood, but is unable to destroy the third pig's house, made of bricks. Printed versions date back to the 1840s, but the story itself is thought to be much older.[citation needed] The phrases used in the story, and the various morals that can be drawn from it, have become embedded in Western culture.

It is a type 124 folktale in the Aarne–Thompson classification system.

The Three Little Pigs was included in The nursery rhymes of England (London and New York, c.1886), by James Orchard Halliwell-Phillipps.[1] The story in its arguably best-known form appeared in English Fairy Tales by Joseph Jacobs, first published in 1890 and crediting Halliwell as his source. The story begins with the title characters being sent out into the world by their mother, to "seek their fortune". The first little pig builds a house of straw, but a wolf blows it down and the pig runs to his brother's house. The second pig builds a house of sticks and when he sees his brother he lets him in, with the same ultimate result. Each exchange between wolf and pig features ringing proverbial phrases, namely:

The third pig builds a house of hard bricks and he lets his brothers in when he sees them. The wolf fails to blow down the house. He then attempts to trick the pigs out of the house, but the pigs outsmart him at every turn. Finally, the wolf resolves to come down the chimney, whereupon the pigs boil a pot of water in which the wolf lands and is cooked.

The story uses the literary rule of three, expressed in this case as a "contrasting three", as the third pig's brick house turns out to be the only one which is adequate to withstand the wolf.

Variations of the tale appeared in Uncle Remus: His Songs and Sayings in 1881. The story also made an appearance in Nights with Uncle Remus in 1883, both by Joel Chandler Harris, in which the pigs were replaced by Brer Rabbit. Andrew Lang included it in "The Green Fairy Book", published in 1892, but did not cite his source. In contrast to Jacobs's version, which left the pigs nameless, Lang's retelling cast the pigs as Browny, Whitey, and Blacky. It also set itself apart by exploring each pig's character and detailing interaction between them. The antagonist of this version is a fox, not a wolf. Blacky, the third pig, rescues his brother and sister from the fox's den after killing the fox.

A well-known version of the story is an award-winning 1933 Silly Symphony cartoon, which was produced by Walt Disney. The production cast the title characters as Fifer Pig, Fiddler Pig, and Practical Pig. The first two are depicted as both frivolous and arrogant. The end of the story has been slightly altered: the wolf is not cooked but instead burns his behind and runs away howling.

Three peacetime sequels followed, then a Tex Avery cartoon named Blitz Wolf, a 1942 wartime version with the Wolf as a Nazi.

Fifer Pig, Fiddler Pig, Practical Pig, and the Big Bad Wolf appeared in the 2001 series Disney's House of Mouse in many episodes, and again in Mickey's Magical Christmas: Snowed in at the House of Mouse. The three pigs can be seen in Walt Disney Parks and Resorts as greetable characters.

In 1985, Faerie Tale Theatre recreated The Three Little Pigs, starring Jeff Goldblum as The Wolf, and Billy Crystal, Stephen Furst, and Fred Willard as the pigs.

The 1989 parody, The True Story of the Three Little Pigs, is presented as a first-person narrative by the wolf, who portrays the entire incident as a misunderstanding; he had gone to the pigs to borrow some sugar, had destroyed their houses in a sneezing fit, ate the first two pigs to not waste food (since they'd died in the house collapse anyway), and was caught attacking the third pig's house after the pig had continually insulted him.

The 1992 Green Jellÿ song, Three Little Pigs (and its claymation music video) sets the story in Los Angeles. The wolf drives a Harley Davidson motorcycle, the first little pig is an aspiring guitarist, the second is a cannabis smoking, dumpster diving evangelist and the third holds aMaster of Architecture degree from Harvard University. In the end, with all three pigs barricaded in the brick house, the third pig calls 911. John Rambo is dispatched to the scene, and kills the wolf with a machine gun.

The 1993 children's book The Three Little Wolves and the Big Bad Pig inverts the cast and makes a few changes to the plot: the wolves build a brick house, then a concrete house, then a steel house, and finally a house of flowers. The pig is unable to blow the houses down, destroying them by other means, but eventually gives up his wicked ways when he smells the scent of the flower house, and becomes friends with the wolf.

In an advert in the British newspaper The Guardian, the aftermath of the Three Little Pigs tale is told in the style of modern news media coverage, including social media reaction and the sociopolitical consequences of the story. This retelling eventually reveals the pigs to be attemptinginsurance fraud by blaming the wolf, who had asthma, for blowing their houses down.

In 2003 the Flemish company Studio 100 created a musical called Three Little Pigs (Dutch: De 3 Biggetjes), which follows the three daughters of the pig with the house of stone with new original songs, introducing a completely new story loosely based on the original story. The musical was specially written for the band K3, who play the three little pigs, Pirky, Parky and Porky (Dutch: Knirri, Knarri and Knorri).

The three pigs and the wolf appear in the four Shrek films, and the specials Shrek the Halls and Scared Shrekless.

In the book and first film, they are among the many fairy tale creatures banished to Shrek's swamp by Lord Farquaad. The pigs have German accents.

They have a larger role in Shrek 2. They are friends with Shrek prior to the events of the film. In the beginning, they housesit for Shrek and Fiona while they visit the Kingdom of Far Far Away. Later, they see Shrek, Donkey and Puss in Boots arrested in Far Far Away and free them, then head to the castle to stop Prince Charming. They stop The Fairy Godmother's scheme and celebrate. They sing a song together, "Far Far Away Idol".

They are less prominent in Shrek the Third. They appear at the start, heckling Prince Charming (now a dinner theatre actor) off the stage. They appear in the castle, pretending to have tea with the others, while the heroes find Artie, the kingdom's heir apparent. Under pressure, one pig reveals Shrek's plan to Prince Charming and the four are imprisoned. They are later freed and head to the castle to stop Prince Charming from killing Shrek in his show.

In Shrek Forever After, they are at the ogre triplets' birthday party, and eat the occasion cake. In the alternate universe, they are attendants to Fifi in Rumpelstiltskin's castle.