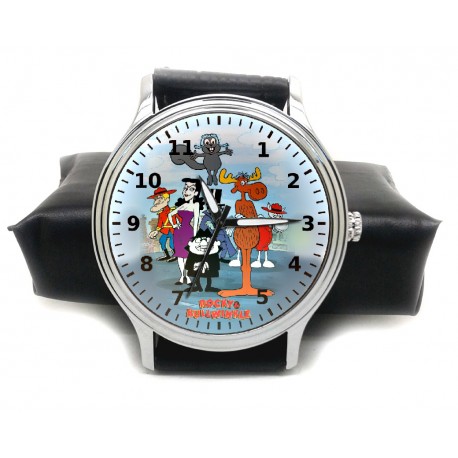 The lead characters and heroes of the series were Rocket "Rocky" J. Squirrel, a flying squirrel, and his best friend Bullwinkle J. Moose, a dim-witted but good-natured moose. Both characters lived in the fictional town of Frostbite Falls, Minnesota, which was based on the real life city of International Falls, Minnesota.[18] The scheming villains in most episodes were the fiendish, but inept, agents of the fictitious nation of Pottsylvania: Boris Badenov, a pun on Boris Godunov, and Natasha Fatale, a pun on femme fatale. Boris and Natasha were commanded by the sinister Mr. Big and Fearless Leader. Other characters included Gidney & Cloyd, little green men from the moon who were armed with scrooch guns; Captain Peter "Wrongway" Peachfuzz, the captain of the S.S. Andalusia; and the inevitable onlookers, Edgar and Chauncy.

When first shown on NBC, the cartoons were introduced by a Bullwinkle puppet, voiced by Bill Scott, who would often lampoon celebrities, current events, and especially Walt Disney, whose program Wonderful World of Color was the next show on the schedule. On one occasion, "Bullwinkle" encouraged children to pull the tuning knobs off the TV set. "In that way," explained Bullwinkle, "we'll be sure to be with you next week!" The network received complaints from parents of an estimated 20,000 child viewers who apparently followed Bullwinkle's suggestion. Bullwinkle told the children the following week to put the knobs back on with glue "and make it stick!". The puppet sequence was dropped altogether. He did a segment called "Dear Bullwinkle," where letters specially made for the show were read and answered humorously.

Each episode is composed of two "Rocky & Bullwinkle" cliffhanger shorts that stylistically emulated early radio and film serials. The plots of these shorts would combine into story arcs spanning numerous episodes. The first and longest story arc was Jet Fuel Formula consisting of 40 shorts (20 episodes). Stories ranged from seeking the missing ingredient for a rocket fuel formula, to tracking the monstrous whale Maybe Dick, to an attempt to prevent mechanical, metal-munching, moon mice from devouring the nation's television antennas. Rocky and Bullwinkle frequently encounter the two Pottsylvanian nogoodniks, Boris Badenov and Natasha Fatale.

At the end of most episodes, the narrator, William Conrad, would announce two humorous titles for the next episode that typically were puns of each other. For example, during an adventure taking place in a mountain range, the narrator would state, "Be with us next time for 'Avalanche Is Better Than None,' or 'Snow's Your Old Man.'" Such a 'This,' or 'That' title announcement had been used in The Adventures of Sam Spade radio shows produced in 1946-50. The narrator frequently had conversations with the characters, thus breaking the fourth wall.

Episodes were introduced with one of four opening sequences:

Episodes ended with a bumper sequence in which a violent lightning storm destroys the landscape, appearing to engulf Rocky and Bullwinkle in the destruction and accompanied by dramatic piano music. The music would become more lighthearted, and the ground would scroll upward while the outlines of the heroes gradually appeared. We then see a smiling sun overlooking a barren field which rapidly fills with sunflowers until Rocky and Bullwinkle finally sprout from the ground.