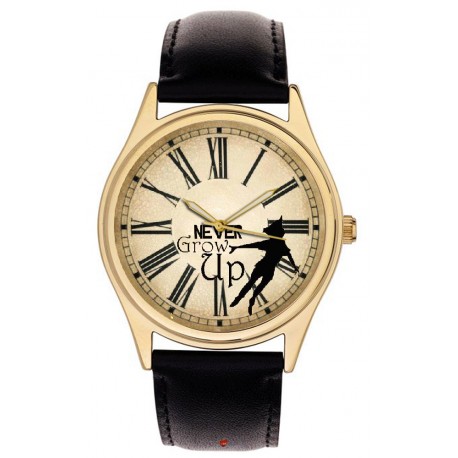 Peter Pan is a character created by Scottish novelist and playwright J. M. Barrie. A free spirited and mischievous young boy who can fly and never grows up, Peter Pan spends his never-ending childhood having adventures on the mythical island of Neverland as the leader of the Lost Boys, interacting with fairies,pirates, mermaids, Native Americans, and occasionally ordinary children from the world outside Neverland. In addition to two distinct works by Barrie, the character has been featured in a variety of media and merchandise, both adapting and expanding on Barrie's works. These include a 1953 animated film, a 2003 dramatic/live-action film, a TV series and many other works. 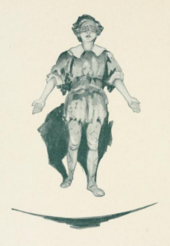 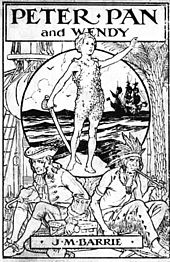 J. M. Barrie first used Peter Pan as a character in a section of The Little White Bird (1902), an adult novel where he appears as a seven-day-old baby in the chapter entitled Peter Pan in Kensington Gardens. Following the success of the 1904 play, Barrie's publishers, Hodder and Stoughton, extracted chapters 13–18 of The Little White Bird and republished them in 1906 under the title Peter Pan in Kensington Gardens, with the addition of illustrations by Arthur Rackham.[2]

He returned to the character of Peter Pan as the centre of his stage play entitled Peter Pan, or The Boy Who Wouldn't Grow Up, which premiered on 27 December 1904 in London. Barrie later adapted and expanded the play's story line as a novel, published in 1911 as Peter and Wendy.

Barrie never described Peter's appearance in detail, even in his novel, leaving it to the imagination of the reader and the interpretation of anyone adapting the character. In the play, Peter's outfit is made of autumn leaves and cobwebs.[3] His name and playing the flute or pipes suggest the mythological character Pan. Barrie mentions in Peter and Wendythat Peter Pan still had all his "first teeth".[4] He describes him as a beautiful boy with a beautiful smile, "clad in skeleton leaves and the juices that flow from trees".[4]

Traditionally, the character has been played on stage by a petite adult woman.[5] In the original productions in the UK, Peter Pan's costume was a reddish tunic and dark green tights, such as that worn by Nina Boucicault in 1904. This costume is exhibited in Barrie's Birthplace.[6] The similar costume worn by Pauline Chase (who played the role from 1906 to 1913) is displayed in the Museum of London. Early editions of adaptations of the story also depict a red costume[7][8] but a green costume (whether or not made of leaves) becomes more usual from the 1920s,[9] and more so later after the release of Disney's animated movie.

In the Disney films, Peter wears an outfit that consists of a short-sleeved green tunic and tights apparently made of cloth, and a cap with a red feather in it. He has pointed elf-like ears, brown eyes and his hair is red. In Hook (1991), the character is played as an adult by Robin Williams, with blue eyes and dark brown hair; in flashbacks to him in his youth, his hair is light brown. In this film his ears appear pointed only when he is Peter Pan, not as Peter Banning. His Pan attire resembles the Disney outfit (minus the cap). In the live-action 2003 Peter Pan film, he is portrayed by Jeremy Sumpter, who has blond hair and blue eyes. His outfit is made of leaves and vines.

In the novel Peter Pan in Scarlet (2006), Geraldine McCaughrean describes him as having blue eyes and light hair (or at least any colour lighter than black). In this novel, Never Land has moved on to autumn, so Peter wears a tunic of jay feathers and maple leaves. In the Starcatcher stories written by Dave Barry and Ridley Pearson, Peter is described with carrot-orange hair and bright blue eyes.

In the 2011 TV miniseries Neverland, released by Sky Movies in the UK and SyFy network in the US, Peter (played by Charlie Rowe) is portrayed with dark brown hair and eyes. He plays a flute instead of pan pipes.

J.M. Barrie created his character based on his older brother, David, who died in an ice-skating accident the day before his 14th birthday. His mother and brother thought of him as forever a boy.[10] The "boy who wouldn't grow up" character has been described as a variety of ages.

Peter is an exaggerated stereotype of a boastful and careless boy. He claims greatness, even when such claims are questionable (such as congratulating himself when Wendy re-attaches his shadow). In the play and book, Peter symbolises the selfishness of childhood, and is portrayed as being forgetful and self-centred.

Peter has a nonchalant, devil-may-care attitude, and is fearlessly cocky when it comes to putting himself in danger. Barrie writes that when Peter thought he was going to die on Marooners' Rock, he felt scared, yet he felt only one shudder. With this blithe attitude, he says, "To die will be an awfully big adventure". In the play, the unseen and unnamed narrator ponders what might have been if Peter had stayed with Wendy, so that his cry might have become, "To live would be an awfully big adventure!", "but he can never quite get the hang of it".[11]

Peter's archetypal quality is his unending youth. In Peter and Wendy, it is explained that Peter must forget his own adventures and what he learns about the world in order to stay childlike. The prequels by Barry and Pearson attribute Peter's everlasting youth to his exposure to starstuff, a magical substance which has fallen to earth.

Peter's ability to fly is explained, but inconsistently. In The Little White Bird he is able to fly because he is said to be part bird, like all babies. In the play and novel, he teaches the Darling children to fly using a combination of "lovely wonderful thoughts" and fairy dust. In Barrie's Dedication to the play Peter Pan, The Boy Who Wouldn't Grow up,[12] the author attributes the idea of fairy dust being necessary for flight to practical needs:

...after the first production I had to add something to the play at the request of parents (who thus showed that they thought me the responsible person) about no one being able to fly until the fairy dust had been blown on him; so many children having gone home and tried it from their beds and needed surgical attention. - J.M. Barrie

Peter has an effect on the whole of Neverland and its inhabitants when he is there. Barrie states that although Neverland appears different to every child, the island "wakes up" when Peter returns from his trip to London. In the chapter "The Mermaids' Lagoon" in the book Peter and Wendy, Barrie writes that there is almost nothing that Peter cannot do. He is a skilled swordsman, rivalling even Captain Hook, whose hand he cut off in a duel. He has remarkably keen vision and hearing. He is skilled in mimicry, copying the voice of Hook, and the tick-tock of the Crocodile.

In both Peter Pan and Wendy and Peter Pan in Scarlet, Peter's ability to imagine things into existence is noted. This ability is featured more strongly in Peter Pan in Scarlet. He also creates imaginary windows and doors as a kind of physical metaphor for ignoring or shunning his companions. He is said to be able to feel danger when it is near.

In Peter and Wendy, Barrie states that the Peter Pan legend Mrs Darling heard as a child was that when children died, he accompanied them part of the way to their destination so they would not be frightened. This is a role similar to the Greek god Hermes as a psychopomp.

In the original play, Peter states that no one must ever touch him (though he does not know why). The stage directions specify that no one does so throughout the play. Wendy approaches Peter to give him a "thimble" (kiss), but is prevented by Tinker Bell.

The character's name comes from two sources: Peter Llewelyn Davies, one of the five Llewelyn Davies boys who inspired the story, and Pan, a minor deity of Greek mythology who plays pipes to nymphsand is part human and part goat. This is referenced in Barrie's works (particularly Peter Pan in Kensington Gardens) where Peter Pan plays pipes to the fairies and rides a goat. The god Pan represents Nature or Man's natural state in contrast to Civilisation and the effects of upbringing on human behaviour. Peter Pan is a free spirit, being too young to be burdened with the effects of education or to have an adult appreciation of moral responsibility. As a 'betwixt-and-between', who can fly and speak the language of fairies and birds, Peter is part animal and part human. According to psychologist Rosalind Ridley, by comparing Peter's behaviour to adults and to other animals, Barrie raises many post-Darwinian questions about the origins of human nature and behaviour. As 'the boy who wouldn't grow up' Peter exhibits many aspects of the stages of cognitive development seen in children and can be regarded as Barrie's memory of himself as a child, being both charmingly childlike and childishly solipsistic