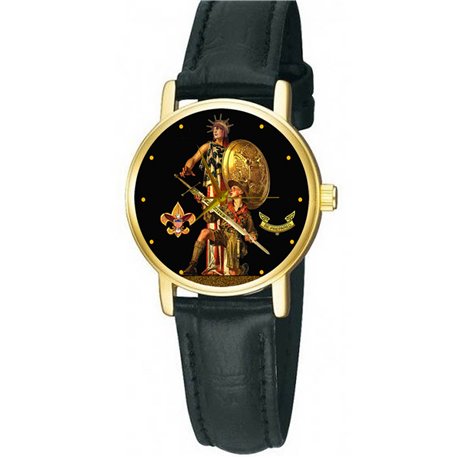 Eagle Scout is the highest rank attainable in the Boy Scouting program of the Boy Scouts of America (BSA). A Scout who attains this rank is called an Eagle Scout or Eagle. Since its introduction in 1911, the Eagle Scout rank has been earned by more than two million young men. The title of Eagle Scout is held for life, thus giving rise to the phrase "Once an Eagle, always an Eagle."

Requirements include earning at least 21 merit badges and demonstrating Scout Spirit through the Boy Scout Oath and Law, service, and leadership. This includes an extensive service project that the Scout plans, organizes, leads, and manages. Eagle Scouts are presented with a medal and a badge that visibly recognizes the accomplishments of the Scout. Additional recognition can be earned through Eagle Palms, awarded for completing additional tenure, leadership, and merit badge requirements.it

Eagle Scout medal as published in the Handbook for Boys (1911)

The BSA's highest award was originally conceived of as the Wolf Scout, as shown in the June 1911 Official Handbook for Boys. The August 1911 version of the handbook changed this to Eagle Scout. The medal illustrated in the handbook was a profile of an eagle in flight, but was changed to the current design before any were issued. In their original conceptions, Life Scout, Star Scout (Life preceded Star until 1924) and Eagle Scout were not ranks, but part of the merit badge system that recognized Scouts who had earned a specified number of merit badges. Eagle Scout was awarded to any First Class Scout who had earned 21 merit badges. Consequently, eight of the first nine Eagle Scouts did not earn the ranks of Life or Star.

The first Eagle Scout medal was awarded in 1912 to Arthur Rose Eldred, a 17-year-old member of Troop 1 of Rockville Centre, Long Island, New York. Eldred was notified that he was to be awarded the rank of Eagle Scout in a letter from Chief Scout Executive James West, dated August 21, 1912. The design of the Eagle Scout medal had not been finalized by the National Council, so the medal was not awarded until Labor Day, September 2, 1912. Eldred was the first of three generations of Eagle Scouts; his son and grandson hold the rank as well. Since then, more than two million Scouts have earned the rank. In 1982, 13-year-old Alexander Holsinger, of Normal, Illinois, was recognized as the one-millionth Eagle Scout, and Anthony Thomas of Lakeville, Minnesota was the two-millionth in 2009.

Eagle Scout may be earned by a Boy Scout or Varsity Scout who has been a Life Scout for at least six months, earns a minimum of 21 merit badges, demonstrates Scout Spirit, and demonstrates leadership in the troop, team, crew or ship. He must plan, develop, and lead a service project— the Eagle Project —that demonstrates both leadership and a commitment to duty. He must then take part in a Scoutmaster conference. After all requirements are met, he must complete an Eagle Scout board of review. He can complete the board of review after his 18th birthday as long as all other requirements are completed before his 18th birthday.[12] Venturers and Sea Scouts who attained First Class as a Boy Scout or Varsity Scout in a troop or team may continue working toward the Star, Life and Eagle Scout ranks, as well as Eagle Palms, while registered as a Venturer or Sea Scout up to their 18th birthday. Scouts with a permanent mental or physical disability may use alternate requirements based on abilities, if approved by the council. Eagle Scout may be awarded posthumously, if and only if all requirements except the board of review are completed before death. A board of review may be held and the award presented to the Scout's family. The Spirit of the Eagle Award is an honorary posthumous special recognition for any registered youth member who has died in an accident or through illness.

Of the 21 merit badges, 12 are required; these include: