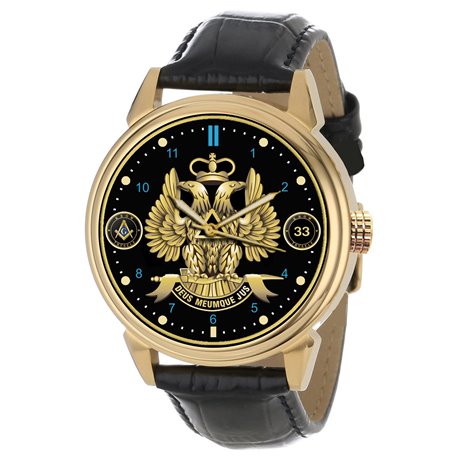 The Ancient and Accepted Scottish Rite of Freemasonry (the Northern Masonic Jurisdiction in the United States often omits the and, while the English Constitution in the United Kingdom omits the Scottish), commonly known as simply the Scottish Rite (or, in England and Australia, as the Rose Croix[1] although this is only one of its degrees), is one of several Rites of Freemasonry. A Rite is a progressive series of degrees conferred by various Masonic organizations or bodies, each of which operates under the control of its own central authority. In the Scottish Rite the central authority is called a Supreme Council. 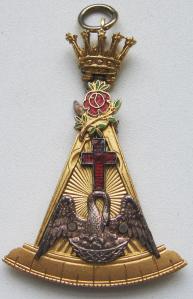 The seed of the myth of Stuart Jacobite influence on the higher degrees may have been a careless and unsubstantiated remark made by John Noorthouk in the 1784 Book of Constitutions of the Premier Grand Lodge of London. It was stated, without support, that King Charles II (older brother and predecessor to James II) was made a Freemason in the Netherlands during the years of his exile (1649–60). However, there were no documented lodges of Freemasons on the continent during those years. The statement may have been made to flatter the fraternity by claiming membership for a previous monarch. This folly was then embellished by John Robison (1739–1805), a professor of Natural Philosophy at the University of Edinburgh, in an anti-Masonic work published in 1797. The lack of scholarship exhibited by Robison in that work caused the Encyclopædia Britannica to denounce it.[4]

A German bookseller and Freemason, living in Paris, working under the assumed name of C. Lenning, embellished the story further in a manuscript titled "Encyclopedia of Freemasonry" probably written between 1822 and 1828 at Leipzig. This manuscript was later revised and published by another German Freemason named Friedrich Mossdorf (1757–1830).[5] Lenning stated that King James II of England, after his flight to France in 1688, resided at the Jesuit College of Clermont, where his followers fabricated certain degrees for the purpose of carrying out their political ends.[6]

By the mid-19th century, the story had gained currency. The well-known English Masonic writer, Dr. George Oliver (1782–1867), in his Historical Landmarks, 1846, carried the story forward and even claimed that King Charles II was active in his attendance at meetings—an obvious invention, for if it had been true, it would not have escaped the notice of the historians of the time. The story was then repeated by the French writers Jean-Baptiste Ragon (1771–1862) and Emmanuel Rebold, in their Masonic histories. Rebold's claim that the high degrees were created and practiced in Lodge Canongate Kilwinning[7] at Edinburgh are entirely false.[8]

James II died in 1701[9][10] at the Palace of St. Germain en Laye, and was succeeded in his claims to the English, Irish and Scottish thrones by his son, James Francis Edward Stuart (1699–1766), the Chevalier St. George, better known as "the Old Pretender", but recognized as James III & VIII by the French King Louis XIV. He was succeeded in his claim by Charles Edward Stuart ("Bonnie Prince Charles"), also known as "the Young Pretender", whose ultimate defeat at the Battle of Culloden in 1746 effectively put an end to any serious hopes of the Stuarts regaining the British crowns.

The natural confusion between the names of the Jesuit College of Clermont, and the short-lived Masonic Chapter of Clermont, a Masonic body that controlled a few high degrees during its brief existence, only served to add fuel to the myth of Stuart Jacobite influence in Freemasonry's high degrees. However, the College and the Chapter had nothing to do with each other. The Jesuit College was located at Clermont, whereas the Masonic Chapter was not. Rather, it was named "Clermont" in honor of the French Grand Master, the Comte de Clermont (Louis de Bourbon, Comte de Clermont) (1709–1771), and not because of any connection with the Jesuit College of Clermont.[11]

A French trader, by the name of Estienne Morin, had been involved in high-degree Masonry in Bordeaux since 1744 and, in 1747, founded an "Écossais" lodge (Scottish Lodge) in the city of Le Cap Français, on the north coast of the French colony of Saint-Domingue (now Haiti). Over the next decade, high-degree Freemasonry was carried by French men to other cities in the Western hemisphere. The high-degree lodge at Bordeaux warranted or recognized seven Écossais lodges there.

In Paris in the year 1761, a patent was issued to Estienne Morin, dated 27 August, creating him "Grand Inspector for all parts of the New World". This Patent was signed by officials of the Grand Lodge at Paris and appears to have originally granted him power over the craft lodges only, and not over the high, or "Écossais", degree lodges. Later copies of this Patent appear to have been embellished, probably by Morin, to improve his position over the high-degree lodges in the West Indies.[12]:31–45

Morin returned to the West Indies in 1762 or 1763, to Saint-Domingue. Based on his new Patent, he assumed powers to constitute lodges of all degrees, spreading the high degrees throughout the West Indies and North America. Morin stayed in Saint-Domingue until 1766, when he moved to Jamaica. At Kingston, Jamaica, in 1770, Morin created a "Grand Chapter" of his new Rite (the Grand Council of Jamaica). Morin died in 1771 and was buried in Kingston.[13]:16

Early writers long believed that a "Rite of Perfection" consisting of 25 degrees, (the highest being the "Sublime Prince of the Royal Secret", and being the predecessor of the Scottish Rite), had been formed in Paris by a high-degree council calling itself "The Council of Emperors of the East and West". The title "Rite of Perfection" first appeared in the Preface to the "Grand Constitutions of 1786", the authority for which is now known to be faulty.[12]:75–84

It is now generally accepted that this Rite of twenty-five degrees was compiled by Estienne Morin and is more properly called "The Rite of the Royal Secret", or "Morin's Rite".[12]:37

However, it was known as "The Order of Prince of the Royal Secret" by the founders of the Scottish Rite, who mentioned it in their "Circular throughout the two Hemispheres"[14] or "Manifesto", issued on December 4, 1802.[15]

Henry Andrew Francken and his manuscripts

Henry Andrew Francken, a naturalized French subject born as Hendrick Andriese Franken of Dutch origin, was most important in assisting Morin in spreading the degrees in the New World. Morin appointed him Deputy Grand Inspector General (DGIG) as one of his first acts after returning to the West Indies. Francken worked closely with Morin and, in 1771, produced a manuscript book giving the rituals for the 15th through the 25th degrees. Francken produced at least four such manuscripts. In addition to the 1771 manuscript, there is a second which can be dated to 1783; a third manuscript, of uncertain date, written in Francken’s handwriting, with the rituals 4–25°, which was found in the archives of the Provincial Grand Lodge of Lancashire in Liverpool in approximately 1984; and a fourth, again of uncertain date, with rituals 4–24°, which was known to have been given by H. J. Whymper to the District Grand Lodge of the Punjab and rediscovered about 2010.[16] Additionally, there is a French manuscript dating from 1790-1800 which contains the 25 degrees of the Order of the Royal Secret with additional detail, as well as three other Hauts Grades rituals; its literary structure suggests it is derived from a common source as the Francken Manuscripts.[17]

A Loge de Parfaits d' Écosse was formed on 12 April 1764 at New Orleans, becoming the first high-degree lodge on the North American continent. Its life, however, was short, as the Treaty of Paris (1763) ceded New Orleans to Spain, and the Catholic Spanish crown had been historically hostile to Freemasonry. Documented Masonic activity ceased for a time. It did not return to New Orleans until the late 1790s, when French refugees from the revolution in Saint-Domingue settled in the city.[13]:16

While in New York City, Francken also communicated the degrees to Moses Michael Hays, a Jewish businessman, and appointed him as a Deputy Inspector General. In 1781, Hays made eight Deputy Inspectors General, four of whom were later important in the establishment of Scottish Rite Freemasonry in South Carolina:

Physician Hyman Isaac Long from the island of Jamaica, who settled in New York City, went to Charleston in 1796 to appoint eight French men; he had received his authority through Spitzer. These men had arrived as refugees from Saint-Domingue, where the slave revolution was underway that would establish Haiti as an independent republic in 1804. They organized a Consistory of the 25th Degree, or "Princes of the Royal Secret," which Masonic historian Brigadier ACF Jackson says became the first Supreme Council of the Scottish Rite.[12]:66–68 According to Fox, by 1801, the Charleston bodies were the only extant bodies of the Rite in North America