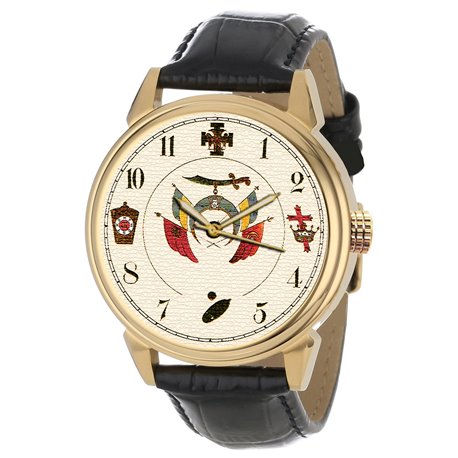 The Meaning Behind 15 Common Masonic Symbols

It seems like Mason symbolism is everywhere, even in places you may not notice. Similarly, you might not be aware of the deep meaning behind each of these symbols, which go beyond Freemasons wanting to just leave their mark on everything they build or touch.

We’ve taken 15 of the most common Masonic symbols and explained them here. Some of them you might recognise or even already know about - but you might find that others are a complete surprise.

1. The All Seeing Eye The All Seeing Eye, also known as the Masonic Eye or Eye of Providence, is up there as one of the most recognized Freemason symbols. This is especially so considering it features on none other than the American dollar bill. It’s been around since way back in 1797 when it was introduced in a publication of the Freemasons Monitor.

It represents the eye of God and serves as a reminder to Freemasons that God is always watching, seeing all of their actions and thoughts. While Freemasons can’t claim an entire letter of the alphabet as their own, they do use the letter G within their symbolism quite frequently. The problem is, there’s a bit of contention around what it actually means.

Some say it’s as simple as standing for ‘God’ and ‘Geometry’. Others believe it represents the word ‘Gnosis’, meaning the knowledge of spiritual mysteries, which is a big component of Masonry. Others still devise that the letter G in ancient Hebrew had a numerical value of 3, which is highly referenced throughout history when talking about God.

As well-represented as the All Seeing Eye is, the Square and Compasses are really the most well known or recognized Freemason symbol. The meaning behind it is quite literal, with the square representing morality in that Freemasons need to ‘square [their] actions by the square of virtue with all mankind’.

The compass then measures the ability to wisely conduct actions within certain boundaries. In other words, together the Square and Compasses remind Freemasons to explore their desires and passions without stepping outside the realms of moral behaviour.

4. The Anchor and the Ark The anchor is used a lot in Christian symbolism and has been adopted by Freemasons to have a similar meaning. Basically, it represents hope, as well as peace against stormy weather.

An anchor is used, quite literally, as a way of grounding a ship, and in the same way this symbol talks about living a life that is grounded in hope and peace. The Masonic Blazing Star is said to be the pinnacle of a Freemason’s journey. In Masonry, a man tries to use knowledge to guide him, much like a star that is blazing against a dark night sky. There are two meanings to this symbol. Firstly, it represents the authority of the Freemason yielding it, who might use his gavel to punctuate his ideas and command order like a judge in court does.

Secondly, it’s a tool used to break off the rough edges of a stone. Used in this way, the Masonic Gavel can be a reminder for Freemasons to chip off certain vices and maintain a pure, moral and spiritual heart. Back in the days of King Solomon, Mason’s gave corn as part of their earnings, kind of like a tax. These days it’s used during dedication ceremonies, mainly, and sometimes to represent charitable giving to the less fortunate. The Acacia tree is an incredibly hardy, durable tree, and as such has been used to depict immortality throughout ancient history. The Hebrew people used to mark their graves with a sprig of Acacia for this very reason.

Aligning with the Masonry belief in the afterlife, the Acacia Tree represents their enduring, immortal souls.

9. Ark of the Covenant The Ark of the Covenant can be found in the Bible as God’s promise to David. Freemasons draw significance and symbolism from it as today, it represents God’s continued forgiveness of their transgressions. Like many religious entities, the Masonic Altar represents a place where communion can take place with God. It’s where the Holy Book(s) are stored, as well. A cable tow is attached to a Freemason’s robe and represents a promise that he will help his Brother however much he can - as long as it’s within the length of his tow rope. That’s why the length of the cable tow rope is so important; it measures how capable the Brother is in terms of being able to assist his fellow Freemason. A long time ago, people would confirm a verbal contract by taking off their shoe and giving it to the other person. Now the Masonic Shoe, also known as Blue Slipper, is a symbolic confirmation that what has been said will be done. Another hotly contested symbol, it’s widely accepted that The Beehive symbolizes the need for Masons to work together to keep the world operating. Some believe that there is a deeper, more complex meaning behind it, but generally, this is the idea represented wherever The Beehive is present. Coffins usually represent mortality, but within the world of Freemasonry, the meaning behind them can get a bit murky. Sometimes coffins are represented with a Sprig of Acacia, which would depict immortality. Other times it has a 5 pointed star associated with it.

The meaning behind the coffin, then, seems to be interchangeable with whatever context it’s provided in. Things get a bit geometrical here, so bear with us. The 47th Problem of Euclid - also known as Pythagorean Theorem - is symbolic of the need to ‘square your square’. In everyday practice, this means to keep your life in order, and in building infrastructure, it is the method Freemasons follow when laying foundations.